When you think of self-discipline, learning to defend yourself, and being in top physical condition - you think of karate. According to the U.S. Department of Health and Human Services, physical activity benefits children and adolescents, young and middle-aged adults, older adults, and those in every studied racial and ethnic group. Their 2008 report stated: "It's important for all Americans to be active, and the guidelines are a roadmap to include physical activity in their daily routine," HHS Secretary Mike Leavitt said. "The evidence is clear - regular physical activity over months and years produces long-term health benefits and reduces the risk of many diseases. The more physically active you are, the more health benefits you gain." 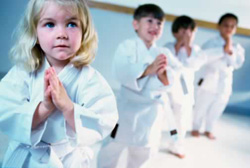 Your child will benefit from USA Karate in many ways. Many physicians recommend USA Karate as a way to help children achieve social, physical, mental, and emotional growth. Their attention span, and ability to sit still and learn will increase through the self-discipline that they will develop as they train at USA KARATE. As their karate skills improve, so will their self-image. Your child will become more willing to try and excel, and their fear of failure will diminish. The multiple colored stripes and belt progression system provides a short-term goal structure that will teach your child to be success oriented. At USA KARATE, all children are successful - at their own pace.

An estimated 18.8% of children aged 6 to 11 years of age and 17.4% of adolescents aged 12 to 19 years of age in the United States are overweight. The most immediate consequence of being overweight as perceived by the children themselves is social discrimination, which has been associated with poor self-esteem and depression. Overweight adolescents have a 70% chance of becoming overweight or obese adults. A recent study in California of over 954,000 school age children has concluded that children at higher fitness levels do better academically. Students who met minimum fitness levels showed the greatest gains in academic achievement. The real key is to get active!