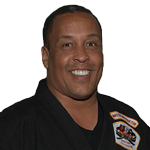 Grand Master Gordon Franks has over 40 years experience in the martial arts. After earning his black belt in 1972, it took him just three years to win the PKA World Super Lightweight championship in full contact karate.

Being one of the most recognized fighters in the country had many benefits, such as a chance to travel to Paris, France in May of 1976 as a member of the American All Star Team along with World Champions Bill Wallace, Jeff Smith, Joe Lewis and Isaias Duenas.

Feature articles in Karate Illustrated Magazine, Professional Karate Magazine, Sport Karate Magazine, Official Karate Magazine, and Minnesota Business Journal. He is listed in the History of Martial Arts, and Who's Who in American Martial Arts. Franks was the chairman of the PKA Fighters Association and a deputy commissioner on the Minnesota Boxing Board in charge of competitive karate activity in Minnesota. Franks' fights have been televised on CBS and on the ESPN cable network, where he has also been an expert commentator. He and Pat Worley have been recognized as KARATE MASTERS. 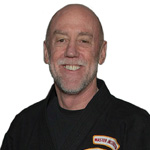 As stated in "The Official History of Karate in America", written by Al Weiss, "Pat Worley is a twenty-two year-old competitor who has claimed some of karate's most coveted titles in the past few years. Among these are… the 'Nationals' in Washington, D.C. He has been referred to as one of the most well-mannered competitors on the tournament circuit." Grand Master Worley, who was rated in the national top ten for fighting from 1970 through 1975,

was the number one contender for the World Middle-weight title from 1974 to 1977.

Grand Master Worley moved to Minnesota in 1974 and is one of the original founders of USA KARATE.

He is a martial arts instructor, retired top-ranked national competitor, and is currently a Tenth degree black belt registered with the World Martial Arts Ranking Association.

In April 2009, Grand Master Worley was inducted into the Tae Kwon-Do Hall of Fame.